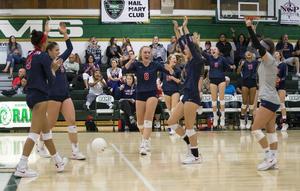 No sharing this year. Not for the Liberty volleyball program, which clinched an outright Southwest Yosemite League championship Tuesday night with a 25-15, 25-21, 25-20 road win over Garces.
Last year, the two teams shared the league title with identical 9-1 records. Liberty (16-8, 9-0) proved its superiority this season, however, with a thorough win Tuesday that showed their skill, balance and mistake-free approach.

Garces is now 26-8 overall and 6-3 in the SWYL, one game behind Bakersfield High for second in the league standings. All teams have one match remaining in their regular season schedules.

“As a team, we kind of said ‘this is how we’re going to enter this game, and we’re going to get the job done. We are not going to share a title,’” said Patriots star senior Elise Ferreira. “We did that last year. We didn’t want to do that this year.”

Ferreira is a headline player for the Patriots — an ultimate all-around athlete who’s a triple-double threat every time she takes the floor. That was on display Tuesday when she made a number of breathtaking plays and finished with 12 kills, 14 digs and 17 assists.

She’s flanked by standout junior libero Jaleesa Caroccio, who saved points throughout the evening by coming out of nowhere and laying out on the floor. Caroccio compiled a team-high 18 digs.

They weren’t alone in the effort.

Kaitlan Tucker is another great senior leading the Patriots, and junior Kaiah Sentes is a key contributor.

The team also has four sophomores who hold their own in the lineup: Paige Camarillo, Reese Renz, Brynna Slayton and Bree Rodriguez.

“Obviously you have the two senior leaders,” Liberty head coach Amy Parker said when discussing the team’s depth. “After that, though, we’re fairly young.”

There weren’t many holes in their game during Tuesday's league-clinching victory.

Said Caroccio: “We’ve worked really hard and I feel like this year we really came together, not just in games but also friendships. Everything like that has helped us off the court, on the court.”