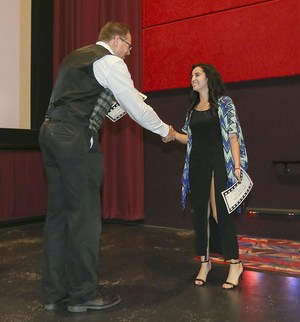 People flocked to Maya Cinemas in downtown Bakersfield on Wednesday night to go to the movies, but these weren’t the typical films one would normally see at the local theater.

The theater screened 10 short films completed by small teams of students over the course of 24 hours as part of the Kern High School District’s annual 24 Hour Film Project. Awards were handed out during and after the screenings.

“We want to give student filmmakers the opportunity to get their films shown. The only people who usually get to see them are teachers and fellow students,” said Antonio Garcia, who teaches drama and career and technical education at South High School. “They get to show their friends and family that they take film seriously and have a passion for it.”

The films ranged in tone and scope. Some were based in the real world — such as in one film in which a woman takes things a little too far in punishing her boyfriend for cheating on her — while others were more fantastical in nature, such as one film depicting a woman trying to survive in a post-apocalyptic world.

Each team had to pick a film type, character, prop and a line of dialogue for their film from a list of choices. Students began working on the project on April 5, during which they had six hours to come up with a script. They then had time on April 6 and 7 to shoot the film, edit it, add any special effects and more, with the total amount of time adding up to 24 hours.

“It’s always important to reinforce deadlines and the fact that in this world, they need time management skills,” Garcia said. “There’s no better way than to give them a deadline, make them map out what to do and complete their task.”

While the project has typically been available only to high school students, the district opened it up this year to junior high and college teams. Garcia said the district received a video from Stonecreek Junior High School and National University.

“We’re trying to be inclusive,” Garcia said. “We know Bakersfield doesn’t have a lot of opportunities for filmmakers to show their work. We wanted this to be their opportunity.”

Garcia said nearly 50 films were submitted this year, with each film averaging around four minutes. Only the top 10 were screened in their entirety on Wednesday. However, snippets from the other films were included in montages for each film type.

South High student Brody Miller said his team of four made a film about a shoplifter who steals a Christmas tree ornament that, unbeknownst to him, has a genie inside it. Miller said he enjoyed making the film, although he said there were a few hiccups in the process.

He said the team had one ornament at the time of filming and then one of the actors dropped it and it shattered. They had to go get some other ones to finish the shoot.

“It was stressful because we were running out of time,” he said.

Miller, who acted in the film and was also responsible for the music and sound design, said he would like to make a career out of the filmmaking business.

“I’d like to get into music and sound design work,” he said.

West High senior Hugo Avila participated in the project this year for his second time. His team made a film about a group of crime-fighters that uncover a mystery regarding a home invasion. Avila acted in the film and also helped write the script, which he said was the most challenging part of the experience.

“We had an idea, but it took awhile to come up with the details,” he said. “You need to work fast and efficiently. I learned how to pump out ideas quickly.”

Avila said he worked with some of his teammates the last time he participated in the project, so he said they were able to work together well.

“I liked working with my teammates. They’re good sports,” he said. “It was a fun experience.”

Avila said participating the project has helped him learn a lot about the challenges and complexities of filmmaking.

“I feel it really helped me understand how hard it is to make a film,” he said. “I didn’t really know a lot about film before I took video production. I had always enjoyed a good movie, but I wanted to get a better grasp of how films are made.”

Garcia said he believes students enjoy participating in the project because it helps them hone their filmmaking skills while also getting to work as a group. He said for many students, the contest is their favorite part of the year.

“It’s a real bonding experience for the kids involved,” he said. “Good friendships develop from just being with each other for those 24 hours.”

Garcia said that as the students grow older, he hopes they will look back fondly on their experiences with the project.

Seeing the result of the students’ efforts has been a great experience for him as well, he said.

“I love the event because it gives the kids motivation but also gives them a sense of satisfaction when they’ve completed a film,” Garcia said.

Joseph Luiz can be reached at 395-7368 or by email at jluiz@bakersfield.com. You can also follow him on Twitter @JLuiz_TBC.