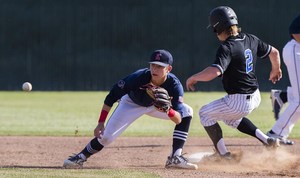 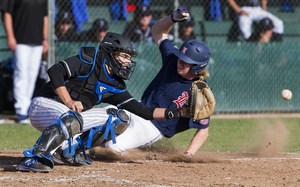 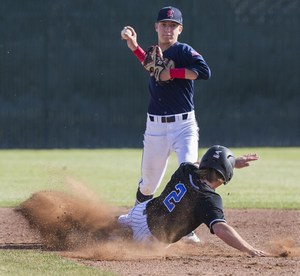 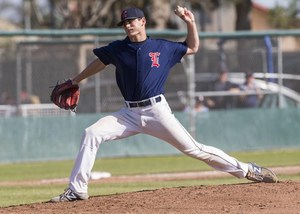 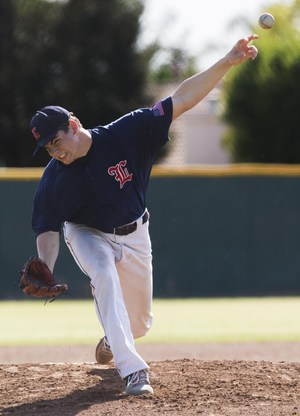 Tony Mills needed a double-take at the scoreboard in center field to make sure he wasn’t seeing things.

For the second day in a row, his Liberty baseball team trailed by a four-run deficit heading into the bottom of the seventh inning against Frontier in Southwest Yosemite League play.

The head coach then turned to his players, reminding them that on Thursday they were able to load the bases late, albeit in a losing effort. This time around, however, Mills told them it was their chance to come away victorious.

That’s exactly what the Patriots did, scoring five runs including the game-winner with pinch-runner P.J. Brown, who scored from third with two outs on a fielding error after Andrew Yoder hit a hard ground ball to second base.

The Liberty dugout cleared, as Yoder was dogpiled in the Patriots' 11-10 win.

“I give a lot of credit to our kids, man,” Mills said. “They didn’t get down on themselves. They used their emotion and channeled it in the right direction and found a way to get it done against a solid team.”

Frontier (13-7, 4-2) got on the board first as Will Hernandez grounded into a fielder’s choice, scoring Nick Phair from third in the top of the second inning against Liberty ace Easton McMurray. There were about a half-dozen professional baseball scouts at Patriots Field to watch McMurray, an LSU commit, pitch on Friday.

Frontier got ahold of McMurray in the fourth inning, scoring four runs. The rally included RBI singles by Phair, Tristin Tatum and Will Reynolds, as the Titans took a 5-0 lead.

McMurray was only able to get through 3 ⅔ innings of work.

“I went out there and felt like I competed,” said McMurray. “This was one of those games where I need help.”

Liberty was able to answer offensively.

After Isaac Rios’ sacrifice fly scored Nolan Proffitt in the fourth inning, Liberty tied the score at 5-5 in the fifth inning on the strength of a 3-run double by freshman Jacob Tobias.

“Jacob Tobias is a freshman kid that has been a guy I’ve been watching since last summer,” Mills said. “He gives us really good, quality at bats. He made it count today.”

For every comeback Liberty made, Frontier had an answer.

The Titans retook the lead at 6-5 in the top of the sixth, as Brett Wakefield singled in Elijah Pascual. Pascual had a big night at the plate, hitting two doubles and driving in three runs.

Liberty countered back with McMurray, however, who doubled with one out in the bottom half of the sixth and scored on a fielding error at third. McMurray blew through Mills’ stop sign at third base and scored under the tag at home to tie the game up.

“That’s the second one (I’ve ran through) this series and I was safe one both,” McMurray said. “It’s probably not the smartest play, but I’ve been told to work hard and it’s worked out both times.”

Frontier put in a second four-run inning in the top of the seventh, with Reynolds cranking an RBI double. The senior led the Titans with four hits.

“To see him come along and play this way on the offensive end this year for us, it’s big," Frontier coach Garrett White said. "He really plays smart and is a quiet and easy leader going about things the right way.”

The bottom of the seventh started with a leadoff single by Donovan Rodriguez and continued as Brady Amble walked with the bases loaded out of the No. 9 spot in the lineup. McMurray followed with an RBI base hit to make it 10-8.

Freshman Kaleb Dickey’s liner to right field was misplayed and two runs came in to tie the game.

As McMurray was picked off in a rundown, Dickey was able to advance to third.

Mills pinch ran Brown, who scored on the next at bat.

Frontier won the first two games of the three-game series this week and remains in sole possession of second place in league play behind undefeated Stockdale.

“We played well today. Both teams are very competitive. It’s a rivalry game,” White said. “Everybody wants to win and our kids are pretty upset that we let this one get away. (Liberty) played well at the end.”