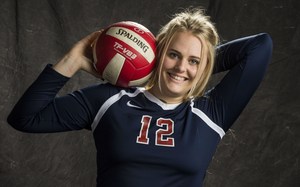 Lauryn Burt was methodical about the next big decision in her life.

The Liberty senior, who was named the 2017 BVarsity All-Area Volleyball Player of the Year, knew she wanted to play volleyball in college, but needed it to be the right fit personally and competitively.

It wasn’t just about being able to say she would be an NCAA Division I volleyball player. She had to be comfortable with the program, school and coaching staff for the next four years of her life.

On Wednesday evening, Burt had family over to her parents home, as she signed a National Letter of Intent to play at UNLV.

“I wanted to be 100 percent positive of what I want. It’s D-I volleyball,” Burt said. “I had doubts about my size, if I was tall enough. I said, ‘screw it.’ I knew I am good enough. So it was just about the best coaching staff and support for me. It wasn’t just about playing volleyball.”

“I fell in love with it,” Burt said of the UNLV campus. “I went to the campus and I loved it and the coach. I just bonded so well with the girls there. It’s a really nice school and fit well with my major.”

She says she wants to major in journalism and will play setter for the Rebels, who went 8-23 overall last season and 4-14 in Mountain West Conference play.

As a captain this past season for the Patriots, Burt recorded 231 kills, 40 aces, 202 digs and 378 assists, helping to lead Liberty to a Central Section Division I semifinal appearance and a road win over Studio City-Harvard Westlake in the CIF Southern California Division I playoffs.