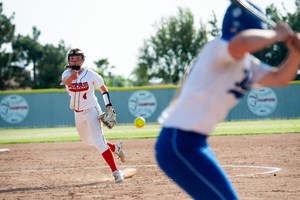 While Liberty played solid softball throughout Tuesday afternoon, Frontier  didn’t have its strongest performance of the season.

The result was a 6-0 score in a game that seemed to pit two fairly evenly matched teams on paper against one another. The end result was far from that determination, however, as Liberty moved to 11-3 on the year and 4-0 in Southwest Yosemite League play. Frontier is now 11-10 overall and 3-2 in the SWYL.

The two teams will square off at Liberty again Thursday. It will be their third meeting of the season, with the Patriots holding a 2-0 edge.

Tuesday simply wasn’t the Titans’ day, however, particularly at the plate.

Frontier managed just one hit on the afternoon, an infield single in the fourth inning. Liberty starting pitcher Talia Nielsen threw strikes all day, and when the Titans made contact it seemed balls were routinely fouled off, more often than not going off or over the backstop.

“We just came off of a two-day weekend, out-of-town tournament. We struggled a little bit in the tournament, but I think it carried over,” said Frontier head coach Ronnie Oates, whose team has lost four of five. “We weren’t playing our game.”

Neilsen had a nice performance in her own right, striking out 14 in what turned out to be a thorough shutdown on the scoreboard.

“She’s always stellar. Talia is a workhorse,” said Liberty head coach Ryane Petersen. “She wants the ball every single game. I think she came out strong. She dominated.”

To the Patriots' credit, they delivered when it counted. Shelbie Valencia had an RBI base hit in the first inning to put her team ahead 1-0. She came through again in the third with a two-run triple to break things open as Liberty took a 4-0 lead.

“It felt really good,” Valencia said. “I like being the hero of the game and I like feeling good about myself.”

The Patriots look to keep pace with Stockdale, the longtime SWYL power, which also holds a 4-0 league mark.

Liberty and Stockdale still have to pick up a suspended game from earlier this season — the score was tied 3-3 through six innings on March 30 before rain interrupted the contest.

That means next week the Patriots and Mustangs will essentially play three times — at Stockdale on April 17 before a doubleheader April 19 at Liberty. The two teams will complete the series opener that day, then play their third and final regular season contest immediately following.

“We could have a long day that Thursday,” Petersen quipped.

“It should be exciting. Everyone’s talked about Stockdale. They have been the team to beat the last couple of seasons.”

Still, the Liberty head coach said her team can’t afford to overlook anyone on the schedule.

“We’re trying to get 1 percent better every single day … We know that league is important. First step is league. We know that is a huge competition for us, so we come out practicing every single day. We want to take everyone seriously in this league no matter what. We can’t have a bad day.”