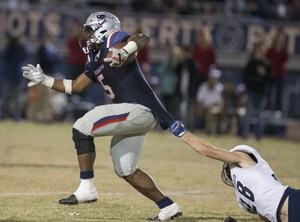 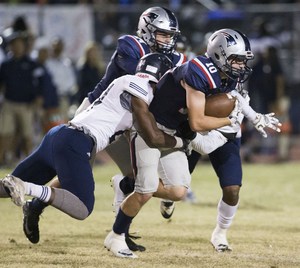 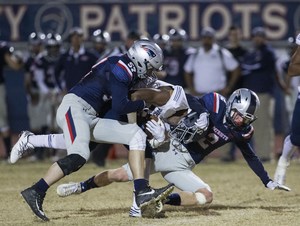 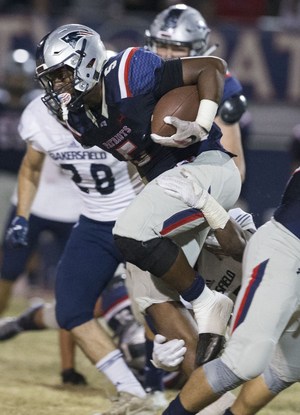 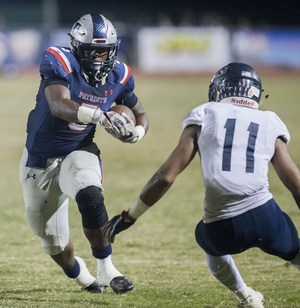 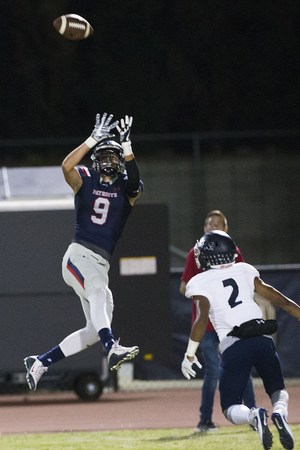 Bakersfield was just 10 yards away from scoring what could have been the game-winning touchdown. The Drillers had mounted a comeback with a 52-yard touchdown run on the previous drive and a partially blocked punt on defense to follow it up, getting the ball at the 25.

But when Liberty’s Brock Anderson emerged from a pile at the 10 with the ball with fewer than three minutes to go, he also emerged with the game.

Off the backs of quarterback Isaiah Hill and running back Sam Stewart Jr., Liberty ran out the clock. Stewart Jr. busted out a 57-yard run down to the 3-yard line before the Patriots knelt.

With a 27-24 win over Bakersfield on Friday night, the Patriots won their third Southwest Yosemite League title in the last four years. Liberty has gone 5-0 in SWYL play three times in the last four seasons.

The winless month of September is now a distant memory as Liberty is on a five-game winning streak before the start of the playoffs. And the Patriots put to bed any thoughts of a three-way tie with BHS and Garces for the top spot in the SWYL.

“The way our season started they really responded and they stayed true to the process,” Liberty head coach Bryan Nixon said. “Very pleased with how they battled and that was a 48-minute battle tonight.”

It looked like Liberty might have scored the decisive touchdown when Hill ran in an 11-yard score to put the Patriots up 27-17 with 8:09 left.

Two BHS quarterbacks went down on the previous possession that went nowhere. But starter Caden Ochoa came back out for the Drillers and broke off a 17-yard run before running back Wesley Wilson exploded for a 52-yard touchdown run. Wilson broke through a hole and powered through contact at about the 5.

The score brought the Drillers within three with 6:59 to go.

That would be the final score of the game, though. Ochoa took a third down run from the 10 and lost control of the ball.

Hill picked up 13 yards. Stewart got five then seven. He closed it out with a big run down the left sideline.

“Our defense did a good job and they fought,” Nixon said. “... Very pleased with the way it came down and moving the ball at the end to get a first down and run the clock out.”

Liberty and Bakersfield have met 13 times since 2007, including the regular season finales the last three years. Despite the win, the Patriots still trails that series 7-6.

From the start, Bakersfield’s habit of penalties was an apparent problem. The Drillers had forced Liberty to punt from about midfield but the drive was extended thanks to an illegal participation penalty. The Patriots took a 3-0 lead shortly after.

But Bakersfield countered right back with an 80-yard touchdown drive. The options runs were too much for Liberty to handle and Wright ran in a pitch from Ochoa from 16 yards away.

The second time into the red zone on its first two drives didn’t go much better for Liberty. Paxton Winders knocked in his second field goal of the game — this time from 29 yards out.

The second quarter started with Bakersfield in the red zone itself after a 32-yard scamper from Ochoa. But his pass to Wright in the end zone a few plays later was broken up and the Drillers settled for a field goal.

Liberty’s only touchdown of the first half came when Hill hit Krauss in the back of the end zone for a 15-yard score.

The Patriots punted the ball away on its next drive for the Drillers’ first defensive stop, but BHS fumbled on the punt return, giving Liberty the ball at the 3. The Patriots, though, came up empty on three plays.

Instead of settling for a third red zone field goal, the Patriots went for it on fourth down and Stewart was dropped for a loss. Liberty could have taken a 10-point lead into halftime but only led 13-10 at the break.