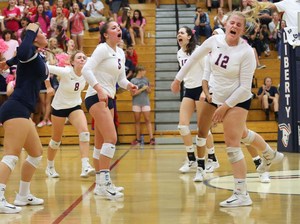 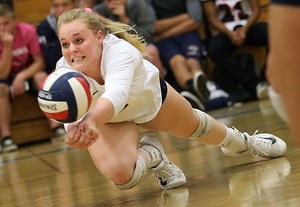 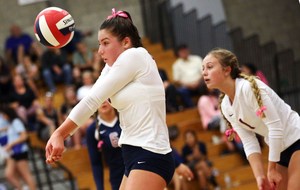 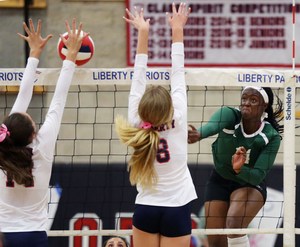 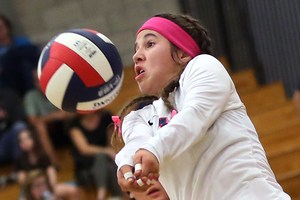 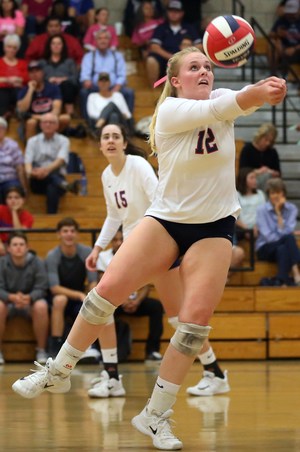 Elise Ferreira doesn’t know what it’s like to not be a Southwest Yosemite League champion.

The junior do-it-all superstar for Liberty has been part of two Patriots teams that won outright SWYL titles en route to Central Section Division I championship appearances, winning it all last season.

At home on Thursday against Garces, a team that Liberty trailed in the league standings with just three matches to go in the regular season, Ferreira and the Patriots weren’t ready to concede the league race away just yet.

“We came into this game knowing that the league was on the line,” Ferreira said. “We took that to motivate us. We played super hard because we knew what was on the line and we had super-high expectations for ourselves.”

Garces, led by 16 kills from Perri Starkey and another 12 from Lailah Green, stormed out to a first set victory with ease partly on timely hitting, but on sloppy play from Liberty early on as well.

“It took a while for us to get started, we were just finding a rhythm,” Ferreira said. “It took a while to get our competitive mojo kind of going and we finally did. And it was redemption.”

Liberty coach Amy Parker has leaned on Ferreira and fellow captain Lauryn Burt many times over the last three seasons, for good reason.

Ferreira had a match-high 15 kills, recorded 29 assists and had 14 digs and nearly single handedly put Liberty out in front early in the fourth and final set with five kills during a 6-1 rally.

Burt recorded 14 kills, 23 assists and two acres. One of those aces finished the match and started a celebration on the court with the Liberty student section.

“You can’t ask for a better tandem,” Parker said. “There is not a better tandem than those two in the area in my opinion. I wouldn’t say they have free reign, but they get to run the show. I expect them to make the choices and I expect them to do what needs to be done. I don’t want it to be me all the time and they do a great job of that.”

This is the first season back in D-I for Garces after the Rams won the D-II title last season.

Garces won the first meeting between the two on Oct. 3 in four sets.

Given the two likely will be in the top-four seeds when the playoff brackets are announced after the regular season ends next week, the likelihood of a third and final match this season is not out of the question.

“It’s really cool that they moved into Division I now,” Ferreira said. “It gives us an opportunity to play them again. I think it’s so much fun to play them, always. And to (maybe) get a third time, it would be awesome.”

Garces coach John Parker believes that despite the undefeated record in league play coming into Thursday’s match, his team had room to grow. After the close loss on the road, his attention now is on making sure that the loss doesn’t distract his players from the ultimate goal.

“We just weren’t super sharp,” Price said. “When we talk about our inconsistency, you could see it tonight. We have trouble staying engaged for certain periods of time. When we are engaged, we play some really good defense. And when we are not engaged, you see us looking at balls hit the floor. We did both of those things tonight. When you are playing a good team like Liberty, you can’t do that. Hopefully they will figure it out.”

Lanie Camarillo chipped in with 13 kills for Liberty as Liana Caroccio had 23 kills for the Patriots.

Priscilla Miranda had 41 assists for Garces as Green and Alia Lidgett had 22 digs for the Rams.

The Rams finish the regular season next week against Frontier and Stockdale next week, as Liberty plays Centennial and Bakersfield in the final week to stay in the league title hunt.

“It’s huge. We talked about this that it’s now or never,” Parker said. “We knew that there could be the possibility of a league title on the line.”