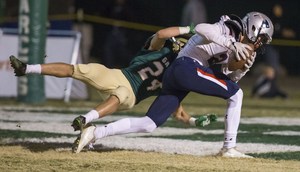 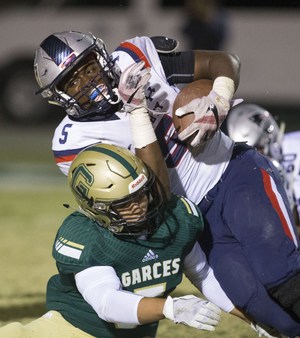 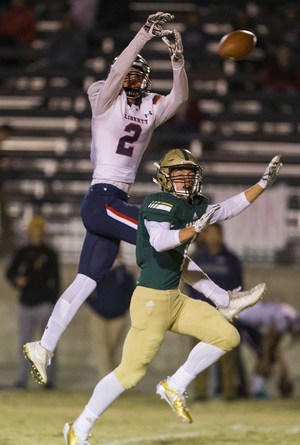 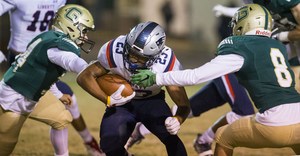 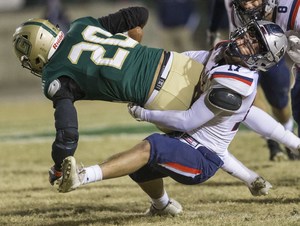 Liberty head coach Bryan Nixon told his players before Southwest Yosemite League action began that they needed to “wash their clothes and get September off of them.”

If Nixon was a superstitious type, he may want his players to keep that laundry dirty for a while.

After the Patriots went 0-4 in September, Liberty is now 3-0 in SWYL play after a 45-13 win over Garces on Friday night at Sam Tobias Field at Garces.

“We are really pleased with how the kids came out with passion tonight,” Nixon said. “They played 48 minutes from start to finish. This was a great effort.”

The Patriots (4-4, 3-0) scored on all five of their offensive series in the first half.

Isaiah Hill was 5-of-7 passing for 88 yards before halftime with touchdowns passes of 15, 25 and 36 yards while twice connecting with Seth Krauss.

Krauss also grabbed an interception in the second half that led to a 22-yard touchdown run by Sam Stewart Jr. before halftime.

“This was a really big game for me,” Krauss said. “I had a lot of fun tonight, and that was huge. I liked how we played as a team.”

Stewart finished with 210 rushing yards on 28 carries and two touchdowns.

“It was a huge game,” Stewart said. “We came out wanting to prove a point that we are a great football team and we proved that tonight.”

Garces (2-6, 2-1) capitalized on two Liberty fumbles on punt returns in the first half.

On the opening drive of the night, Garces punted away from the Liberty 40. Bryan Pantoja recovered the fumble for the Rams and five plays later, Garces had a 7-0 lead on a 2-yard run by Isaiah Martin.

Again in the second quarter, another fumble on a punt return resulted in a 22-yard scoring run by Martin on the ensuing drive.

But Liberty responded each time before intermission while holding Garces scoreless for the remaining 44:22 of the game and held Martin, who had 923 yards in the first seven games to just 89 yards on 24 carries.

“That was the big thing. We needed to stop the run,” Nixon said. “They guys came out with intensity all night long.”

Ochoa and Hill combined to go 10 of 12 passing for 158 yards as six different receivers caught passes, including a 25-yard scoring catch by Kobe Alvarez in the first quarter from Hill.

“Our passing game hasn’t been strong for us lately,” Nixon said. “So for us to be that successful tonight and get a lot of guys into the mix was key.”

Liberty is 3-0 to start SWYL play for the third consecutive season. The Patriots went 5-0 in 2015 and 2015 while playing in the Central Section championship both seasons, winning the title in 2015 before losing the semifinals last season to Bakersfield.

Liberty is on the road next week at Centennial before hosting Bakersfield on Nov. 3.