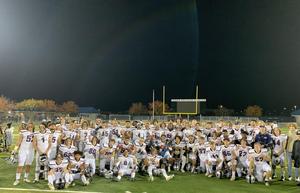 The Liberty football team poses with the championship trophy after defeating Fresno-Central 42-14 in the Central Section Division I title game on Friday night at Deran Koligian Field.

Senior quarterback Carson Woods threw three touchdown passes and junior tailback Jalen Hankins returned from an injury to run for two more as Liberty cruised to a 42-14 victory over Fresno-Central in the Central Section Division I championship game at Deran Koligian Field on Friday night in Fresno.

"I'm just really pleased with how our kids played," ninth-year Liberty coach Bryan Nixon said. "I'm excited for our kids and our coaches in our program. Central is an amazing program. They've been to five Valley championships in a row, so for our kids to come out and start fast and play the way they did, I'm really proud of them."

Woods opened the game's scoring with a 12-yard scoring pass to Luke Wattenbarger and then threw touchdown passes to Austin Pratt (35 yards) and Kresean Kizzy (32 yards) to help the Patriots build a 35-7 halftime lead over the three-time defending D-I section champions.

"We had a great week of practice," Nixon said. "Our scout team did a great job and our kids were focused. We came out and played hard and got off to a fast start. That was really exciting."

Liberty (10-2), the No. 4 seed, will play in the state playoffs next week. The Regional Bowl Game schedule will be announced Sunday afternoon.

"Our kids never really favored on where we were," Nixon said. "We didn't focus on that. We focused on getting better. And they just kind of bought into that. I'm really proud of the way they've done that."

Wattenbarger capped the scoring in the first half with an 80-yard interception return for a touchdown.

Hankins, who missed last week's victory over top-seeded Clovis-Buchanan with a knee injury, played with a brace and scored on a 14-yard run in the first quarter. The play was set up by a long punt return by Jason Oliver, who was finally brought down at the Central 15. Hankins finished off Liberty's scoring with a 1-yard TD run with 6:32 left in the third quarter.

The game was played with a running clock in the fourth quarter with the Patriots leading 42-7.

"It's always emotional," Nixon said. "You love these kids and you se how hard they've put in work and how hard they played, so I'm just really excited for them and couldn't say enough good about them."