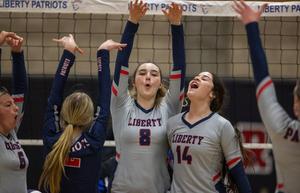 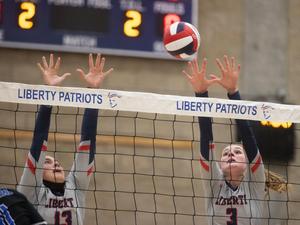 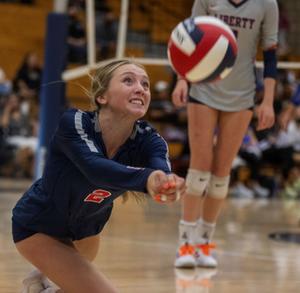 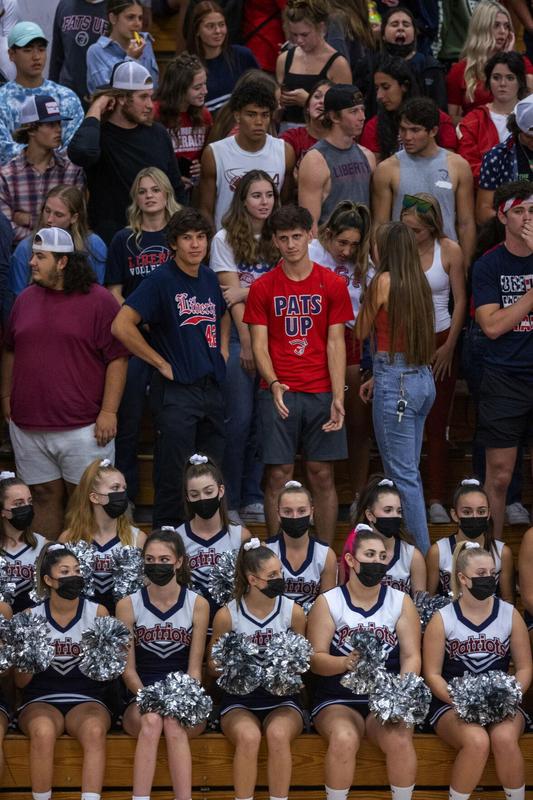 The Patriots’ victory puts them alone atop the SWYL standings. Coach Dake expects it to be a battle each night, with several teams challenging for the league title.

There was plenty of familiarity when the Liberty and Frontier volleyball teams squared off Tuesday night.

Known by her maiden name back then, Katie Scott, the first-year Frontier coach’s name is immortalized on a championship banner that hangs on the west wall of the Patriots gymnasium.

But those emotions began to fade once the first whistle blew. Liberty ran out to an early lead in the opening set and then rode that early momentum to a 25-20, 25-20, 25-19 victory over the Titans to remain the only unbeaten team in Southwest Yosemite League play.

“I was over there for four years so of course it’s emotional,” said Dake. “I’ve coached (Frontier senior libero) Kya Jones for four years, since back when she was a little freshman and now she’s about to be grown up, 18 years old and graduating. So it comes full circle and I love those girls, and they have a lot of heart.”

Gardenhire had similar emotions returning to her old gym, coaching against her alma mater for the first time since she was head coach at Highland in 2009.

“It was fun to walk in and remember memories here,” Gardenhire said. “But it’s also fun to be on the other side of it.”

The Titans (6-9, 1-2) showcased that determination in the opening set after falling behind 14-5. Led by junior Natalie Duran’s three kills, Frontier scored seven of the next eight points to trim Liberty’s advantage to 15-12.

But just as it did all night, Liberty had an answer.

The Patriots (14-4, 3-0) countered with five straight points and took a 20-12 lead on an ace by senior Holly Stockwell, and eventually closed out the first set on a kill by junior Kamryn Briggs.

“We've been talking about our consistency and taking care of our side of the net,” Dake said. “I feel like we did a better job of that. We’re still not anywhere close to where we need to be down the road, but at least it’s getting better every match, which is nice to see.”

The Patriots took control of a see-saw battle midway through the second set with five straight points, capped by a block and a kill by senior Romi Cyrus.

“It was tough for us to build our momentum tonight,” said Gardenhire, whose team was led by Brooke Shepherd’s nine kills, while Stevie Yursik added six. “They got us this time, but we’re going to come back fired up next time. We just struggled to get into our groove and to gain a lead. I mean Liberty’s got some great hitters and we just struggled to build momentum when we took care of our side.”

In the final set, Liberty trailed 16-13 before scoring nine consecutive points and closed out the match on a net violation by Frontier on a kill attempt by Cyrus.

“We have a lot of goals building toward postseason and we’re just starting to move toward that,” Dake said. “I don’t want to peek now when I feel like we can get better every single match. We’re just taking those lessons we learn every match and every practice and applying it to later down the road.”

The Patriots’ victory puts them alone atop the SWYL standings, following Centennial’s four-set victory over Stockdale on Tuesday. Both the Golden Hawks and Mustangs are now 2-1, and Dake expects it to be a battle each night, with several teams challenging for the league title.

“It’s high school volleyball, high school girls volleyball,” Dake said. “So you never know. If someone shows up, and they’re competitive, and kind of relentless in their competition, you don’t know how it’s going to flip the script. So on any given night I feel like any team can upset any team.”