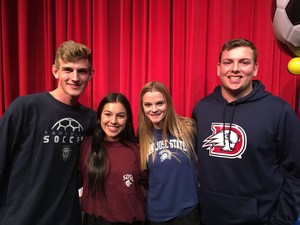 Bryanna Bartlett sat in front of a crowd of nearly 200 people inside the performing arts center on the Liberty campus Wednesday knowing the day wasn’t just about her.

Bartlett, along with fellow seniors Michael Bray, Kobe Franks and Gillian Garcia, signed their National Letters of Intent to play athletics at their respective four-year universities on National Signing Day.

As exciting as it was for Bartlett, who signed to play women’s soccer at San Jose State, to be with her classmates, she also felt the emotion of a day where seven Kern County girls soccer players signed to college.

“I am so excited because we have all dreamt of this day,” Bartlett said. “At the end of the day, it’s going to college ... It’s every single day you’ve poured in and finally getting an end result. It’s that last, ‘ahh, we’re finally here.’ Now we are ready to start another four years at the amazing collegiate level we all dream about.”

Bartlett helped lead Liberty to an outright Southwest Yosemite League championship this season and a possible No. 1 seed in the Central Section Division I playoffs. But signing day was something she's thought about for a decade.

“I’ve been dreaming of this day since I was an 8-year-old,” Bartlett said. “This day is completely joyous. I am so excited to sign right now.”

Bartlett will join former BVarsity All-Area Girls Soccer Player of the Year Kristen Amarikwa at San Jose State. Bartlett played with and against Amarikwa, a Frontier graduate, and knows the feelings she had about her are the same younger players feel about Bartlett.

“I really am,” Bartlett said about her excitement of playing with Amarikwa.

“I know some young girls look at me the way I looked at her and those girls will have girls think that way about them," Bartlett said. "It’s just a chain of inspiration and motivation that goes through Bakersfield and Kern County. I know the way our clubs work, we are so supportive of each other.”

It was a big day for girls soccer players around the county with athletes from Liberty, Independence, East, Highland and Tehachapi signing to play for college women’s soccer programs.

“I absolutely love that I am about to play with another Bakersfield gal,” Bartlett said.

While Bartlett and other local soccer players in Kern County celebrated a banner day for the sport, the football community was relatively quiet on Wednesday.

Bray, an All-Area first-team offensive lineman for the Patriots, is the lone county football player to sign a letter of intent to play football in college. Bray is headed to Dixie State, an NCAA Division II program in Utah. Bakersfield High seniors Caden Ochoa (Cal Poly) and Justin McGill (Sacramento State) signed during the early period in December.

“It’s a little weird,” Bray said. “There is so many great athletes in Kern County and Bakersfield in general. Just a little weird that I am the only one today.”

Bray said he is excited about heading to Dixie State because of the terrain around the campus — he can continue to enjoy the outdoors as an avid hunter and fisherman.

“I just loved the coaching staff. It seemed like a really good fit for me,” Bray said. “The location, it’s not too far from home and I love the mountains and outdoors.”

Liberty football coach Bryan Nixon even eluded to that aspect for the quality of life for Bray in college while speaking about his leader on the offensive line during the signing ceremony.

“He’s gets to go someplace that is a quality education and he gets to live out his dream,” Nixon said. “He gets to hunt, fish and play football. I don’t think it gets much better for him in that regard.”

Garcia didn’t begin diving until her sophomore year in high school after years of competing in gymnastics.

“I honestly did not expect myself to get a dive scholarship because I started it two years ago,” Garcia said. “It’s so fun and amazing and I am excited to start.”

Franks, a standout for the Patriots soccer team, is headed to Vanguard University in Costa Mesa because of his faith and love of the beach.

“It’s probably one of the biggest days of my life so far. I am super excited,” Franks said. “I’ve always loved the beach, and my biggest thing is that it’s a Christian school and the team (came) together when I was down there.”