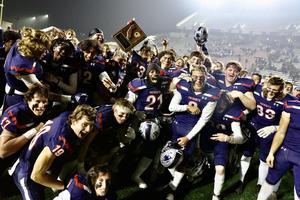 The Patriots advance to the CIF State 1-A Championship on December 11th.

It took a little while for them to warm up Saturday night as a light fog began to roll in, but once they did, a familiar pattern began to emerge.

Just as it has all season, Liberty set the stage early with a stingy defense and a productive, balanced offense, and then put things out of reach with a big fourth quarter, cruising to a 35-7 victory over Pittsburg to capture its first regional bowl victory and advance to the state championship game in front of a large, vocal crowd at Memorial Stadium.

“We kind of came out and were feeling it out in the beginning of the game,” ninth-year coach Bryan Nixon said. “But we always talk about starting fast and our kids were able to do that again this week. It was really encouraging for us and we just kind of ran with it.”

The Patriots will play Gardena-Serra at 4 p.m. Saturday in the CIF State Division 1-A Championship at Saddleback College in Mission Viejo.

“I’m just so happy for our kids,” Nixon said. “They played lights out tonight. That’s a really good football team over there. Well-coached, and our kids came out and got after it. We talked about staying hungry and they were hungry and played hard. What a great venue and what a great supporting cast from Bakersfield, Liberty parents and everyone else that came to watch tonight.”

Senior quarterback Carson Woods and his favorite target Jason Oliver connected for three first-half touchdown passes, and Jalen Hankins gained 159 yards from scrimmage to keep the Pirates (9-3) on their heels all night.

Woods opened the scoring with a six-yard scoring pass to Oliver on the final play of the first quarter. Oliver helped get things started with a 42-yard punt return that pushed the ball to the Pittsburg 30.

“The connection between Carson and I is crazy,” said Oliver, who finished with four catches for 69 yards and three scores. “We’ve been playing together since middle school and GEYF. He’s always been my quarterback and I think we just have that connection. He know where I’m going to be and I know where he’s going to put the ball. And he’s going to put it in a good spot for me to finish.”

Liberty (11-2) had fantastic field position all night, and capitalized a few minutes later after forcing the Pirates to punt.

Oliver took the punt back 18 yards to the Pittsburg 29, and scored two plays later on a 29-yard scoring pass from Woods to make it 14-0 just 1:25 into the second quarter.

“The quick start, we love it, we talk about it all week,” Oliver said. “We have to hop on a team and really keep our foot on the gas pedal. Nixon says that every day. If we get on top, we have to keep going and keep pushing for the win.”

The Pirates struggled to move the ball for much of the game, but appeared ready to make it a one possession game when they drove 73 yards on 13 plays late in the first half. But Charles Brown Jr., fumbled the handoff from the 1-yard line, and the Patriots’ Caleb Reiswig recovered in the end zone.

Liberty then drove 80 yards in the final 3 minutes of the first half, capped by a Woods-to-Oliver TD connection, this time from 15 yards out to make it 21-0 with 13 second left in the second quarter. Woods finished 14 of 19 passing for 156 yards.

“It’s all a dream,” Oliver said. “We’re playing in a junior college stadium. I mean the lights are on, everybody’s here to support, I mean it can’t get any better.”

The Patriots could have put the game away earlier, but two turnovers inside the red zone in the third quarter delayed their efforts.

But Hankins hurdled into the end zone for a 1-yard touchdown run early in the fourth quarter, and Kresean Kizzy returned a punt 26 yards for a score to build the lead to 35-0 with 9:45, initiating a running clock the rest of the way.

Hankins finished with 110 yards rushing on 26 carries, and also had six receptions for 49 yards. Austin Pratt had three catches for 32 yards.

Pittsburg spoiled the shutout when Kai Green broke several tackles and sprinted 51 yards for a touchdown with 6:22 remaining. Pirates junior quarterback Jaden Rashada, who has offers from several NCAA Division I colleges, was 11 of 26 for just 80 yards.

Shutout or not, it did little to dampen the emotions Liberty exhibited after the win.